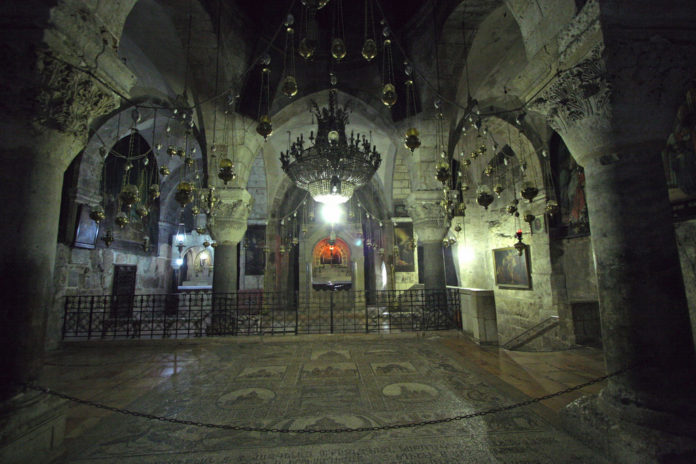 A team of scientists has exposed the original surface of the site where Jesus Christ is believed to have been buried, National Geographic reports. The site is located in the Church of the Holy Sepulchre in the Old City of Jerusalem.

Millions of tourists visit the Church of the Holy Sepulchre every year but the actual tomb has been covered in a protective marble cladding since at least 1555 and likely even centuries before. The researchers removed this marble layer October 26 and discovered another marble slab adorned with a cross.

“The marble covering of the tomb has been pulled back, and we were surprised by the amount of fill material beneath it,” said Fredrik Hiebert, archaeologist-in-residence at the National Geographic Society, a partner in the restoration project. “It will be a long scientific analysis, but we will finally be able to see the original rock surface on which, according to tradition, the body of Christ was laid.”

Heibert revealed that the location of the tomb has not shifted through time and it has intrigued scientists and historians for decades.

Christians believe that the body of Jesus was laid on a burial shelf hewn from the side of a limestone cave. This burial shelf is now enclosed by a small structure called as the Edicule. A team of scientists from the National Technical University of Athens is restoring the Edicule and the interior tomb.

“This is the Holy Rock that has been revered for centuries, but only now can actually be seen,” the project’s Chief Scientific Supervisor Professor Antonia Moropoulou said. “The techniques we’re using to document this unique monument will enable the world to study our findings as if they themselves were in the tomb of Christ.”

Newsboys say they will tour until they are 80: We are just getting started!

Movies Michael Foust - October 7, 2021
Michael Tait says he’s spent most of his life “on the road” while traveling in a bus from city to city and performing in...