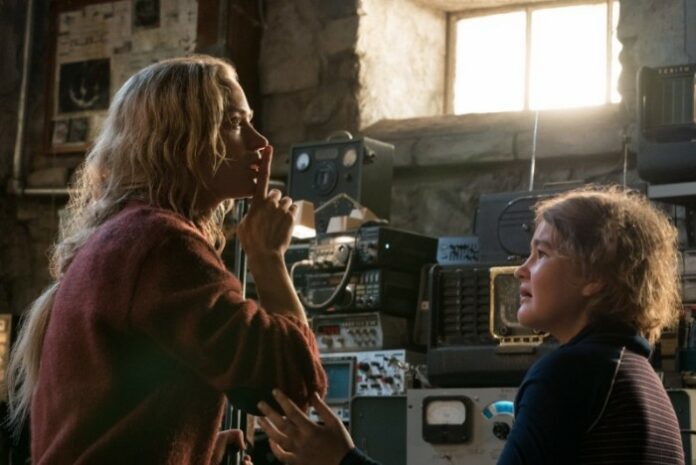 I don’t watch many horror movies. In fact, I typically avoid them like the plague.

My reasoning is simple. I enjoy sleeping in peace at night. I like being able to walk into a dark room without creepy thoughts lurking in my mind. And, most significantly, I believe many horror films glorify violence. Simply put, I don’t find them entertaining.

But, occasionally, a horror film grabs my attention.

Such is the case with A Quiet Place (PG-13), the 2018 hit movie that stars John Krasinski and Emily Blunt. It began streaming April 2 on Amazon Prime and Hulu.

The dystopian-like film tells about a family that’s trying to survive after Earth has been invaded by large, bug-like creatures. These monsters, though, are unique. They have ultra-sensitive ears but no eyes. They’re blind.

This means they hunt for food via sound. Of course, this also means the people better be quiet. Very quiet.

These creatures have eaten most of the population. One heroic family, though, has thrived, out in the country, because they know sign language. That’s because their daughter is deaf.

But now their very existence is threatened because the mom is pregnant — and will deliver a crying baby any day.

A Quiet Place ranks among my favorite horror/thriller films because it’s not graphic. Most of the scares and thrills are implied. It’s also void of coarse language (not even a “heck”) and sexuality (not even a kiss).

Nate Bargatze: The Tennessee Kid (Netflix) — If you like clean comedy, then you’ll probably love Bargatze, who is so talented he’s appeared on The Tonight Show Starring Jimmy Fallon. His comedy is dry, smart and hilarious. It’s also mostly rated G. It began streaming March 26.

You vs. Wild (Netflix) — Adventurer Bear Grylls travels the globe and puts the viewer in control in this interactive series based off his popular Man vs. Wild program. “You’re in charge here. … You decide,” he says. No doubt, viewers will learn a lot about survival. April 10.

Valkyrie (Netflix) — There were at least six assassination attempts on Hitler’s life. This film tells the story of one of them — by Colonel Claus von Stauffenberg. Of course, it also raises ethical questions about war. Rated PG-13 for violence and brief strong language. April 1.

Spy Kids (Netflix) — Carmen and Juni Cortez learn the spymaster ways of their mother and father — and in this first installment, help rescue their parents, too. A few OMGs and a misuse of “shiitake mushroom” keep this one from being 100 percent family-friendly. Rated PG for action sequences. April 1.

Happy Feet (Hulu) — A young penguin who can’t sing learns to survive in a world where singing is essential. This animated film won an Oscar. Caveat: Some parents may find some of the song choices inappropriate for children. Rated PG for some mild peril and rude humor. April 1.

Michael Foust has covered the intersection of faith and entertainment more than a decade. He is the father of an amazing wife, Julie, and the father of four small children.

REVIEW: ‘Gosnell’ isn’t gruesome, but it IS appalling and eye-opening