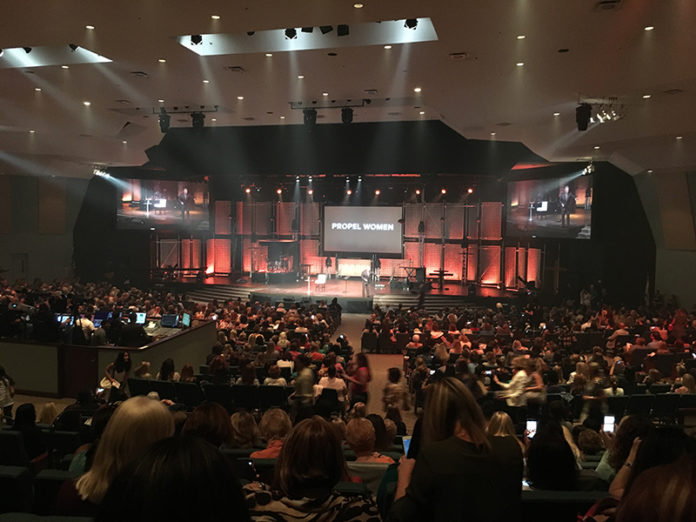 Three of the greatest leaders in modern Christian history; Joyce Meyer, Christine Caine and John Maxwell, took the pulpit at Christ Fellowship to share their wisdom with the women of South Florida at the Propel Lead Conference today.

Christine Caine launched Propel Lead as a ministry to women in the workplace; a ministry she says is open to all women because, “We’re all leaders if we’re leading people to Jesus.”

John Maxwell opened the conference, advising an eager audience that it’s all about intentional living.  “Over time, there is a compounding return with consistency when it is layered with intentionality.”

Pastor Maxwell encouraged persistence and determination, “Everything worthwhile in your life is uphill, and you have to be intentional to go uphill.”  Don’t be starters. Be finishers.  He shared that good intentions never get you anything unless they translate into good actions.  Anything that’s worth doing, you’re going to have to put effort into. It’s not going to be quick.

The theme in many of John Maxwell’s best selling books has been the suggestion to “add value” to peoples’ lives.   His advice to over 3,000 women today was that intentional living is the foundation of your ministry life: value people, believe in people, and love people unconditionally.

Following John Maxwell’s talk, Pastor Todd Mullins interviewed the three ministry giants, Meyer, Caine and Maxwell.  Starting with the question, “What is one piece of advice that you wish someone had told you while you were in your 30’s?”

Joyce Meyer:  Be sure you enjoy the journey; your work, yourself, and your children.

Christine Caine:  Nothing will happen as quickly as you think.

Pastor Todd’s next question was, “What is your best advice for women who lead men?”

Maxwell: It’s uphill. Although women have the advantage of intuition, women have to work harder to earn respect.

Meyer: Attitude. Just because a women leads men, that doesn’t mean she has to act like a man. Using herself as an example, when she’s in the pulpit, she’s in charge of what she’s doing, but when she steps down, she’s Dave’s wife.

Caine: Men with leadership qualities are called strong and determined, while women with the same qualities are sometimes called bossy. She is grateful for the mentoring of people like Joyce Meyer who has given her great support from the time she was a high school youth leader until today.

Joyce Meyer was the second speaker of the day.  Flashing a Bible verse on the screen before she even began talking, she reminds us that Christianity is about our actions more than our words.  “Don’t be all about telling people about Jesus. Show people love.  Preach at all times, and when necessary, use words.” She said that you don’t have to be weird to share the Word. Let the fruit of the Spirit in your life be your testimony, but, she advises, “Don’t be fruit loops.”

Joyce reminded the crowd of leaders to go out of their way for people who cannot do anything for them. “If they see you as an important person and you try to make them feel important, that goes a long way.”

You don’t have to be weird to share the Word. Let the fruit of the Spirit in your life be your testimony, but don’t be fruit loops. ~Joyce Meyer

She recommends being a “people watcher” taking note of how people make you feel. She learned the most from a boss who wasn’t good to her, taking note to avoid doing the same to those under her leadership.  “As a Christian leader, we’re Christians before we’re leaders.”  Give the elderly man in the doctor’s office as much respect and attention as you would give if it were Billy Graham.  “It doesn’t matter how powerful you are on the pulpit. What matters is how I behave off the pulpit when no one is looking.”

Joyce concluded with the suggestion to discern what God wants us to do.  “You can’t say yes to everything. You’ll never finish the journey.” The people who love you will want you to follow the leadership of the Holy Spirit.  The number one secret to success is time with God.

Christine Caine, with her saucy attitude and speedy delivery, addressed the women as “chicks” and immediately admitted that she lives a very unbalanced life.  Her focus can be directed to one mission for certain periods of time, overshadowing other areas of her life.  Although she is a mother, a wife, a social justice spokesperson…she sees these components of her life as a spindles of a wheel with Jesus at the center.

When Christine went in for cancer surgery last year, just before she went under anesthesia, she asked God two questions.

We’re not called to be babysitters. We’re called to be multipliers. Fruitfulness and multiplication are in the DNA of every Christian. It’s who we are. ~Christine Caine

One Scripture that guides her in leadership is John 10:10. “The thief comes only to steal and kill and destroy…” Displaying her birth certificate on the big screen, Christine showed the women that when she was born, before her adoption, her name was just a number. She shared the twelve traumatic years of sexual abuse as a child.  She loves the holy interruption of the second half of John 10:10, “…but I have come that they may have life, and have it to the full.”  Those twelve years served to fuel the passion that led her to go the ends of the earth in search of girls trapped in the bondage of sex slavery.

Christine said, “We’re not called to be babysitters. We’re called to be multipliers. Fruitfulness and multiplication are in the DNA of every Christian. It’s who we are.”

She explains that giftedness is not the same thing as ability.  It’s what you do with your gifts that determines your ability.  Pouring water from a pitcher into glasses, she explains that having the gift (the glass) is just the base. It’s what you do with the gift (as she fills a series of successively larger glasses to the brim).  Most often what stops our capacity is our own brokenness.  On the first commandment, she stated, “Most of us love our neighbors as we love ourselves.  We just don’t really love ourselves.”

When we’re done with this journey, we’re going to get the same reward, “Well done, good and faithful servant” whether we vacuum the church three times a week or lead a global ministry, so long as we do what God has called us to do.

Keep Your Pets Safe During the Dog Days of Summer