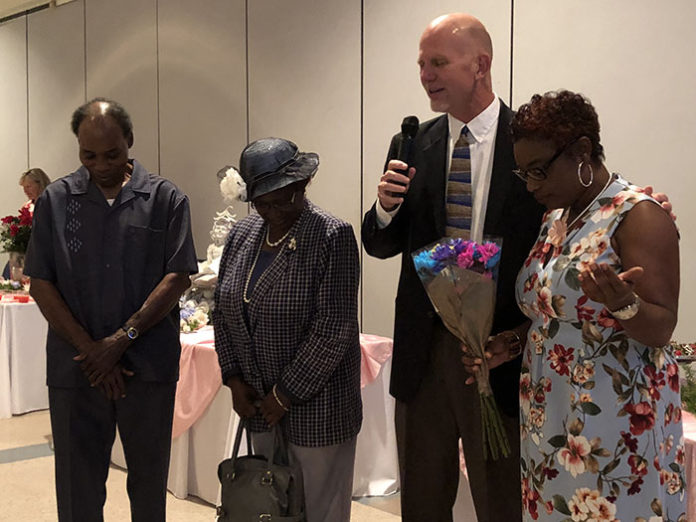 by Lauren Crews and Leslie DeVooght

St. Augustine is a city of firsts. It is recognized as the first colony in the continental U.S. The oldest Christian community began there, and in 1738, it became the site of the first free settlement for ex-slaves at Fort Mose. On July 1st, the city will reach another historical first mile-marker when Jacksonville native Juana Jordan assumes the position of Sr. Pastor at the First United Methodist Church in St. Augustine.

“In the process, we fell in love with her, and found that WE were the ones blessed by her friendship, passion, and passionate preaching. She has changed our church.”

Jordan, a graduate of Emory University Candler School of Theology, was ordained as a full elder in 2017. She is in her eighth year as a full-time pastor, five of which she served as Sr. Pastor of Harris Chapel United Methodist Church in Fort Lauderdale before being appointed back home to Jacksonville to plant a new faith community. She spent her first year getting re-acclimated to the area, serving as Pastor-in-Residence at the predominately white Southside United Methodist Church.

Southside UMC Senior Pastor Bruce Jones explained that Southside was to support Jordan as a sending community in her mission. However, he says “in the process, we fell in love with her, and found that we were the ones blessed by her friendship, passion, and passionate preaching. She has changed our church.”

Having served in predominately African-American churches, the Jacksonville assignment gave Jordan a pause of uncertainty, but she soon discovered a community of acceptance and love. “They loved me in a way I had never been exposed to before by white people and my time there gave me an opportunity to learn and love them right back.”

While serving at Southside, Jordan said she felt God begin to solidify her calling to build a multi-ethnic church in the Jacksonville area that would connect the diverse people of God. She and a small core group focused on the La Villa and Old Brooklyn areas of Jacksonville to establish a new church plant. They began with a prayer walk through the area, and Jordan immediately started making contacts which led to a baby shower for a stranger, a community cookout, and later a Christmas party for the area’s children.

Pastor Bruce Jones says, “Juana brought to the table passion, creativity, and intimate knowledge of Jacksonville. She grew up here, after all.” Although Jordan worked tirelessly and made fantastic inroads into the community, it was determined that the neighborhood wasn’t established enough to support a new church.

Last Spring, the Florida Conference of the United Methodist Church re-assigned her to the 193-year-old church in St. Augustine. “It is a humbling opportunity, that God would pick me,” she noted.

Soon after the announcement of her new appointment, the inter-denominational, ministerial alliance of African-American pastors who meet monthly to support one another and pray together over St. Augustine invited her to join them at their meeting. “When they introduced me it almost seemed like a hush fell over the group,” she said, while smiling and sharing her experience. “They were in shock, because they had been praying for change and a fresh anointing for the churches in St. Augustine. They prayed for evidence of God moving,” she said. “An older pastor who walked in later approached me and said, ‘I was among those marching when we tried to enter that church to worship, and they wouldn’t let us in.’”

The First United Methodist church of St. Augustine, located in the city’s downtown, stands just a few blocks from the open-air pavilion, known as the Plaza de la Constitucion, which was once identified as a slave market. With the English acquisition of Florida in 1763, the plantation system flourished, as did slavery. At the close of the Civil War, nearly 61,000 residents were slaves — roughly half the population. Some may argue that no specific slave market was created in St. Augustine because of the establishment of Fort Mose, but slave sales did occur. The majority of Florida’s plantations owners, such as Zephaniah Kingsley, purchased their slaves in the colonies or directly from Africa. However, because the building was located initially to house goods as they were unloaded from local ships, slaves soon became part of the transactions at that location.

Fast forward two hundred years and St. Augustine’s participation in the Civil Rights movement of 1964 runs deep. The Florida Advisory Committee to the Commission on Civil Rights reported a “Deep-seated widespread feeling of discouragement among Negro citizens of St. Augustine – considerably worse than in most, if not all other cities in the state.” Martin Luther King participated in several nighttime marches in St. Augustine to shine the spotlight on the city’s need to integrate. King called St. Augustine “the most racist city in America.”

“She will not only be the first African-American pastor to lead the church, but also the first woman.”

Almost 60 years to the day of the protest and with this backdrop, Jordan takes the reins at First UMC. She will not only be the first African-American pastor to lead the church, but also the first woman. She hopes to continue her calling to build a diverse church which best represents the community of St. Augustine. “I’m not coming in to make sweeping changes. I want to spend some time just listening to the congregation. I want to hear their dreams for this church and this community. My focus right now is praying, preaching, and helping to create worshipful experiences.”

Pastor Bruce Jones says that the congregation at Southside UMC is sad to see Juana go but is eager to support her on her big step. Many members plan to attend Pastor Jordan’s first sermon on July 1st. “We are proud of her and grateful for the opportunity to walk with her on her journey of faith and service,” Jones added.

St. Augustine has come a long way and has achieved many milestones. Perhaps now, through continued prayer and with Pastor Jordan’s leadership, a new lighthouse, like the one in Anastasia, will become erected in the heart of the city. This light will beckon the diverse people of God to come and indeed grow into an integrated, supportive family of believers.

By Leslie DeVooght and Lauren Crews

Award-winning author Leslie DeVooght writes Southern Romance set in her hometown, St. Simons Island, Georgia. Leslie has been published in Spark magazine, on the ACFW blog and the Florida Christian Writers Conference blog, and will be published in the Writer’s Digest Short, Short Story Anthology this spring. She also posts devotions and flash fiction weekly on her website, www.lesliedevooght.com and can be seen weekly on Facebook Live for Wacky Wednesdays from the Carline. Leslie loves cheering on her three children and date nights with her inspiring husband, who loves that she researches kissing. Keep up with Leslie on Facebook at Leslie Kirby DeVooght and on Twitter and Instagram @LeslieDeVooght.

Officer Adrian and the Story Behind the Picture That Went Viral

Rally in Riviera for Corey Jones