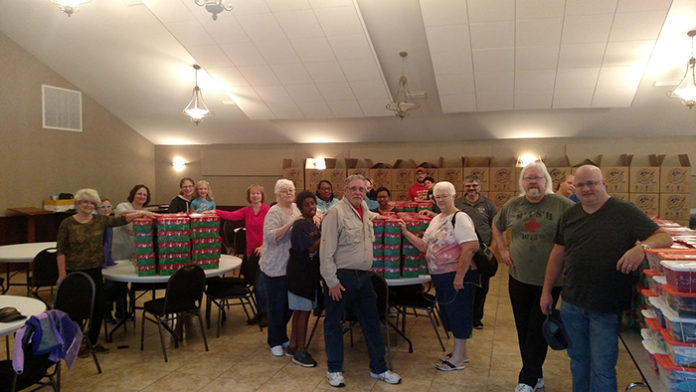 Her motto is, “Just one more child.” This is what the shoebox lady, Elaine Lauderdale, has on her mind when she encourages everyone to participate in Operation Christmas Child at Rosemont Baptist Church in Niceville, Florida. Rosemont, a small church with an average attendance of approximately seventy people on Sunday morning, has sent out over 600 Christmas shoeboxes a year for the last several years. This year, the total was 714! Elaine spearheads this effort through her unique concept of mass production of shoeboxes.

Since 2010, more than 14 million children who have received a shoebox gift have participated in The Greatest Journey—a 12-lesson discipleship program.

All year long, she hunts for bargains and buys items in bulk to go in shoeboxes. This system makes it more affordable to produce more boxes. Because items are purchased throughout the year, Rosemont quickly realized that Elaine needed her own place where she could organize and store things until time to pack boxes in the fall—hence the “Shoebox Room” was born. Elaine, along with her longtime friend and fellow shoebox fanatic, Mary Kirkland, spend countless hours sorting, counting, and organizing items so that by the time the actual packing takes place, everything is ready to go. Usually in October, there are several shoebox packing parties. This year, for the first time, Rosemont had help from students at Rocky Bayou Christian School in Niceville, who were completing community service hours, as well as several people from outside the church.

This year marks the twenty-fifth anniversary of Operation Christmas Child, a project of Samaritan’s Purse, which uses gift-filled shoeboxes to demonstrate God’s love in a tangible way to children in need around the world. The boxes are filled with small toys, personal hygiene items, school supplies, clothing, and other goodies, and delivered to impoverished children around the world. For many of these children it is the first gift they have ever received. Since 1993, Operation Christmas Child has collected and delivered more than 157 million shoebox gifts to children in more than 160 countries and territories. 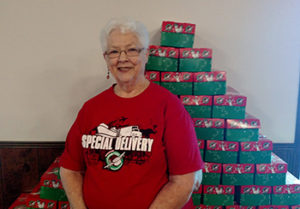 It is not the goal of Operation Christmas Child to supply children with a lifetime of soap, toys, or school items. In fact, a child can only receive one shoebox in his/her life. Rather, it is an opportunity to share about Jesus Christ and God’s love. Since 2010, more than 14 million children who have received a shoebox gift have participated in The Greatest Journey—a 12-lesson discipleship program.

Right after the shoebox dedication day, the second Sunday in November, the shelves in the shoebox room are bare. Elaine starts again, after Christmas, looking for bargains. People all over town know her and Mary, and they have recruited many of them to help.

Children learn from trained, local volunteers what it means to follow Jesus and share their faith with friends and family. It is estimated that for every three shoeboxes sent out, one child comes to know Jesus as their Lord and Savior. That estimate doesn’t include their family members or others in their towns and villages who may also come to a saving knowledge of Jesus Christ as the result of their child receiving a simple gift of love. The testimonies of children whose lives have been forever changed by that one simple act of love are moving—from a child receiving exactly what she needed to carefully counted shoeboxes being multiplied when more children were present than boxes. This is what drives Elaine to pack just one more box for one more child.

Right after the shoebox dedication day, the second Sunday in November, the shelves in the shoebox room are bare. Elaine starts again, after Christmas, looking for bargains. People all over town know her and Mary, and they have recruited many of them to help. Discount stores call when items go on sale. Every month she asks the church members to supply something—soap month, yoyo month, pencil month, etc. The expense, spread over the entire year among several people, is minimal.

Many people, both inside and outside of the church, also make things to go in the boxes, such as dresses, crocheted hats/scarves, tote bags, doll clothes and blankets, or put together things such as sewing kits, and fishing supplies. In addition, Rosemont set up a shoebox fund for people who want to contribute money in addition to, or instead of buying items. Elaine and Mary use this fund to purchase extra things needed to fill up the boxes. And Elaine makes sure they are full! She has taught all the packers to utilize every square inch of those boxes. But the most important thing that is packed is prayer. During every packing session, Elaine stops, gives a “mini sermon,” as she is never at a loss for words, and takes times to pray over the boxes and the children who will be receiving them.

Other churches, many much larger than Rosemont, have sent their shoebox coordinators to learn from Elaine. Most churches which participate in Operation Christmas Child do so by encouraging their members to take home and pack a box or two. Elaine does this, as well. Even though massive numbers of boxes emerge from the shoebox room, members of the congregation are highly encouraged to take home and pack their own personal boxes. Of the 714 boxes sent from Rosemont this year, 65 were packed by individuals or families. Several people have received thank you notes or emails from the child who received their box.

Elaine’s name is well known in the southeastern region with Atlanta as the Operation Christmas Child processing center. She and Mary, as well as other church members, have traveled to Atlanta many times to volunteer for several days working in the processing center. Elaine would be the first to tell people that she doesn’t accomplish putting together the massive number of shoeboxes all by herself or even with Mary. She gives all the credit to God. But it is her infectious passion and enthusiasm for shoeboxes which excites everyone around her and makes them want to get in on the action. Her vision and leadership have enabled a small church to do the impossible—sending out 714 boxes! That’s why she’s called the shoebox lady and that’s why her vision has become Rosemont’s vision of “just one more child.”

Mylee’s Mission Will Touch your Heart

Jacob Berry is Truly an Inspirational Man of God