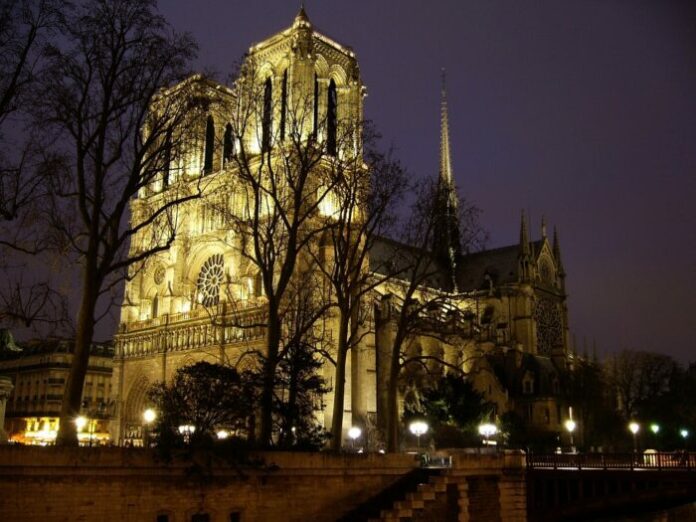 Christian or not, the Notre Dame Cathedral fire was a tragedy.

The world was shocked to learn the news about the blaze engulfing the iconic Notre Dame Cathedral in Paris Monday night. People could only watch in disbelief as the massive fire burned down the historic structure which was constructed in 1163, reports The Independent.

An irony: Christians can watch the destruction of Notre Dame, and be confident, amidst all their sorrow, that only the City of God is truly eternal – that every work of humans will ultimately turn to dust. —Tom Holland, Historian

Parisians mourned the loss of their beloved cathedral, which has survived countless revolutions, world wars, and plagues. People knelt and bowed their heads near the cathedral praying and singing hymns while watching in horror as the flames consumed the landmark’s roof and spire.

Photos and videos of the fire quickly spread through social media. World and religious leaders conveyed their sympathies and support to France.

UN Secretary-General António Guterres was “horrified” by the terrible blaze. He called Notre Dame Cathedral “a unique example of world heritage that has stood tall since the 14th century.”

In a tweet, Ed Llewellyn, Britain’s ambassador to France, said, “All our thoughts with the heroic firefighters as they battle this terrible blaze,” according to The Telegraph.

The Association of English Cathedrals said in a statement, “Our hearts go out to the people of Notre Dame and Paris as we watch this tragedy unfolding; made more poignant at this time of Holy Week – one of the most important dates in the Christian calendar.”

Historian Tom Holland said, “An irony: Christians can watch the destruction of Notre Dame, and be confident, amidst all their sorrow, that only the City of God is truly eternal – that every work of humans will ultimately turn to dust. Those without religious faith lack that consolation.”

Many pledged donations to rebuild the cathedral. Two French tycoons offered to give about $339m (€300m). French president Emmanuel Macron launched a fund-raising campaign for the restoration of the 850-year-old edifice.

Fifteen hours after the fire broke out, Paris firefighters announced that it has been finally extinguished. The cause of the fire is still unknown.

Christians Should Not Fear Talking About Their Faith — UK...

Christianity Under Attack in Nigeria — CAN