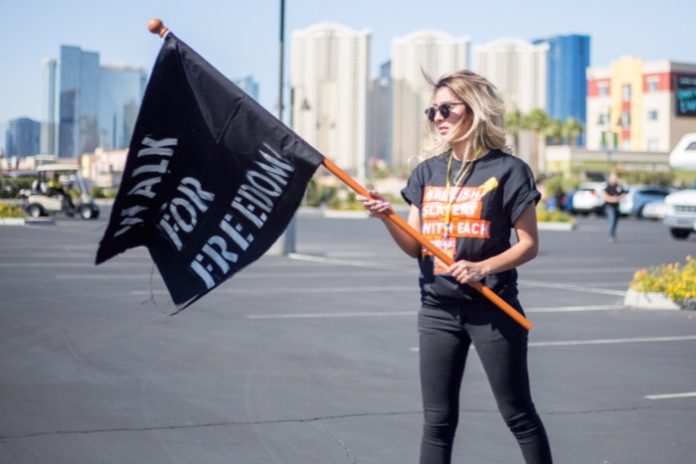 Palm Beach County is rising in the recruitment of young children to the tune of 54% in 2016, so the Human Trafficking Coalition of the Palm Beaches President, Tanya Meade, regularly joins students in raising awareness on the very same grounds. Just in the last year, John F. Kennedy Middle in Riviera Beach, Atlantic High in Delray, and Palm Beach Maritime Academy in Lantana have been working to raise awareness on Human Trafficking.

More arrests are being made as the crime flourishes in Palm Beach County and surrounding areas.

Valentina Ferreira also founded Love Moves in 2013 as a student in Wellington High School. The movement went on to raise $10,000 to help start Palm Beach County’s first safe house. The breeding grounds are schools and students, from lunch hours to after hours. No better place to raise awareness to stop students from becoming victims.

State Legislators agree. Senate Bill 96 would require public middle schools and high schools to include instructions on the dangers and signs of human trafficking in health education classes. Palm Beach County Sheriff’s Office, State Attorney’s Office, and the FBI have collectively formed a task force in 2017 on the crime of human trafficking. More arrests are being made as the crime flourishes in Palm Beach County and surrounding areas.

“Human trafficking is not someone else’s problem; it’s happening in our communities, in our neighborhoods as well as across the world. The devastating disregard of traffickers for the lives of their victims is a tragedy and we cannot delay in acting to end it.”  Ben Cooley, CEO, Hope for Justice

State law defines human trafficking as “transporting, soliciting, recruiting, harboring, enticing, maintaining, or obtaining, another person for the purpose of exploitation of that person.” We call it slavery. With 28 million victims of trafficking worldwide, most being women and children due to their extreme sense of vulnerability. And locally as Ms. Goodman stated, “Florida is the 3rd largest state for trafficking.”

From schoolyards to Super Bowls, trafficking literally steals lives to service a multi-billion business. Palm Beach County local support against this nightmare includes the Palm Beach County Trafficking Coalition, Hepzibah House, Freedom Challenge and Hope for Freedom (Christ Fellowship), to name a few. Global Organizations that fight human trafficking include Not for Sale, Love 146, A21, and literally thousands of other organizations worldwide.

Hope for Justice CEO Ben Cooley who recently joined forces with Singer/Songwriter Natalie Grant’s Abolition International, put it so well when he said, “Human trafficking is not someone else’s problem; it’s happening in our communities, in our neighborhoods as well as across the world. The devastating disregard of traffickers for the lives of their victims is a tragedy and we cannot delay in acting to end it.”

Trafficking is much more than a crime; it’s an evil that destroys lives through the most horrific conditions imaginable. From infant to 80, slavery is alive and flourishing. This satanic evil is described clearly by Jesus in John 10:10. Hope and restoration are also alive, which was also described in Jesus in John 10:10. We have the honor to come alongside those fighting for freedom for those we will never know in a tragedy we can never imagine. Be aware, be active, and be vigilant in the fight. We are free to bring freedom the captives. A million to one.

America Needs Revival, but it must start with me