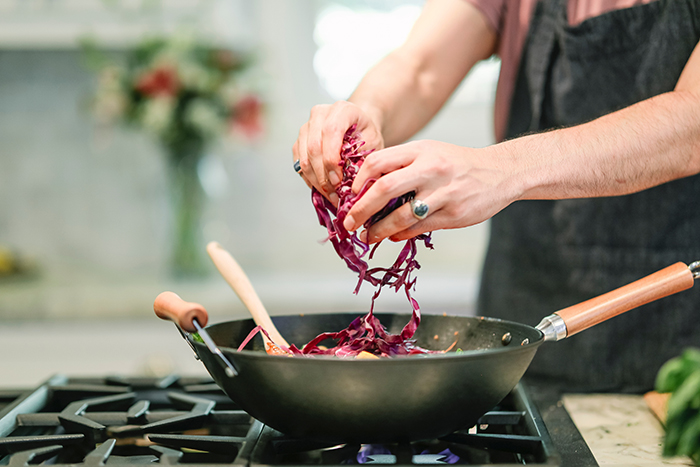 All three women had cancer, were on chemotherapy, and scared to death of the big C (cancer). As I was on duty as a prayer minister, they heightened my awareness of the prevalence of cancer in our church. After they left, God started talking to me about my diet and how it could help cancer patients. I prayed about it, and God led me to teach a cooking class. I use the book that helped heal my own heart disease, The Cancer Survivors Guide by Dr. Neal Bernard and Jenifer K. Reilly. It would be the first time I ever taught a cooking class, so I definitely felt out of my comfort zone.

I was reluctant, but God reminded me that my dad had died at seventy-five after three heart attacks. I was now eighty and in amazing health due to my vegan diet.

It had been a long journey. The first blockage in my coronary artery had been ten years earlier, when a volunteer cardiologist saved my life. He and I were working together in a free clinic in Colorado. He agreed to see me right away when his nurse told him I was having heart symptoms. An angiogram made me face the reality of my own heart disease for the first time. A stent, a small spring to keep my artery open, was placed where the blockage had been.

My own doctor couldn’t see me for three weeks by which time I could easily have died from a heart attack. Another doctor I knew from the free clinic gave me a copy of a book he had written about how to cure heart disease. After reading the book, I began to modify my diet.

For a farm girl going vegan was a drastic step. We had our own cow on my childhood farm. As a child I made butter twice a week by shaking the jar until the butter separated out.

For a farm girl going vegan was a drastic step. We had our own cow on my childhood farm. As a child I made butter twice a week by shaking the jar until the butter separated out. We had our own eggs and used cream to make homemade ice cream every Sunday. I remember butchering our own pigs and steers. Every Sunday we ate fried chicken with mashed potatoes and milk gravy. Now cardiologists and oncologists were telling me to give up meat and dairy.

This vegan idea was a whole new way of life. Initially, I tried cutting out meat and reducing dairy, but I always went back to ice cream and milk in my morning tea. However, I successfully cut out processed meat, beef, pork, and lamb. Initially, I did not know how to add enough protein from other sources.

Then God arranged for me to work at the Yuma Regional Medical Center. My job was to recruit volunteer nurses to set up blood pressure clinics in churches all over town to reduce the onslaught of heart emergencies showing up in the Emergency Room. I was successful in recruiting about forty nurses from a variety of churches, and I began a monthly training for all of the volunteers.

One of the speakers who came to train the volunteers was an oncologist who gave up his practice because he was tired of having his patients die. He promoted a new approach to help cancer patients: a vegan diet.

One of the speakers who came to train the volunteers was an oncologist who gave up his practice because he was tired of having his patients die. He promoted a new approach to help cancer patients: a vegan diet. His wife taught a vegan cooking class, and it was an eye-opener. As a teacher, she was confident, competent, and compelling. I was totally converted. I began to eat vegan. That was five years ago. Her text book was The Cancer Survivors Guide. She taught us how to add enough protein to our diets without meat or dairy. I learned what spreads were best to eat and how to make homemade ice cream without dairy. I know it has helped my heart disease as I no longer need three heart medicines which were prescribed ten years ago.

With a cholesterol of eighty-nine, I was a living example of the benefits.

Last year, after being prompted by the Holy Spirit, I decided to offer to teach a vegan cooking class to the cancer survivors in my church and anyone else who might be interested. With a cholesterol of eighty-nine, I was a living example of the benefits. I knew that my heart healthy diet would help cancer patients and people with migraine headaches and diabetes as well as autoimmune diseases like fibromyalgia.

The students are appreciative. They eagerly listen to and pray for each other as they learn how to suppress cancer growth by diet. They are still hurting and suffering, many are still taking their chemo. Through this class they bond, make friends with each other, become support for each other, and even best friends. I have three rules for my cooking class: The food must be delicious, beautiful, and vegan.

We open with prayer, cook, eat, learn new recipes, and love each other. I teach a ten week class. At the end they are sharing vegan recipes they found with me and the whole class.

Isn’t it just like God to use what I thought was a handicap, my heart disease, to make me a blessing. What an awesome God we serve!